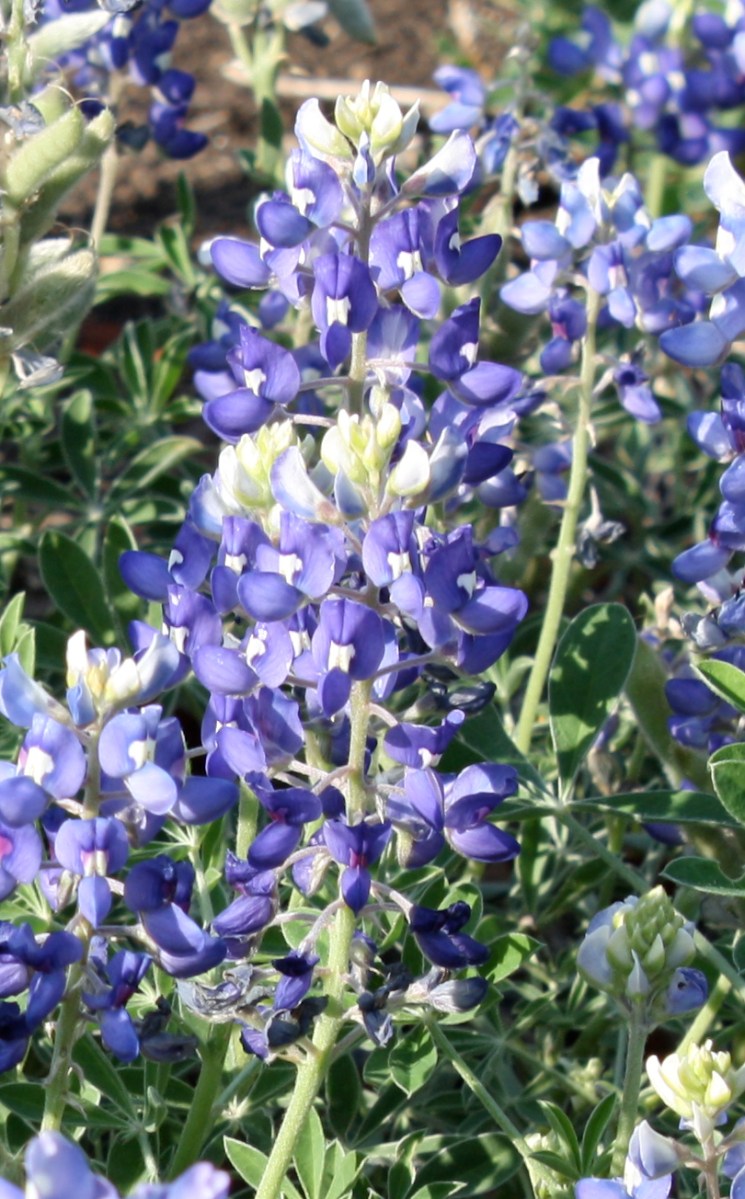 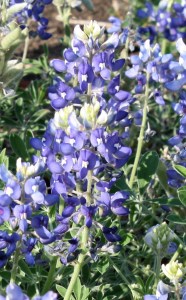 New York is the best! Great city! Great food! Great people! Great culture and art. Music and nightlife. Diversity and inspiration. Millions and millions of other people with their own ideas about how the world should be. It’s enough to make ya sick. I mean do you ever step out of your apartment building or office and take a deep breath and think 12 million other people breathed this air? No, seriously. I love it here, but sometimes I want to go running for the mountains.  Sometimes you gotta get out.

My friend Kerri, and fellow lover of the city, recently got herself a Jeep. Now for those of you living outside of Gotham, that may not seem too radical. But inside the city walls, it is. I got rid of my car in 1997 and haven’t owned one since. I rent when I need one and out of town jobs usually provide one of their own or rent one for me. There was no need. Or so I thought. But by her reports, the city is a new place to her now. There’s the obvious benefits like buy as many groceries as you wish because you’re not gonna develop delts the size of melons carrying them home. Or actually going to the remote UPS pick-up site to retrieve your package when you missed the delivery instead of just saying “Ah, screw it! Those pants I ordered last week are already out of fashion anyway! Besides, to get there was gonna require a subway, bus, and camel ride.” (There’s your Oxford comma, Sean)

What Kerri expected was that the city would open up to her. But what I think surprised her was that the world did, too. No longer were the day’s possibilities limited to the breadth and scope of the MTA subway map. She can now use the zoom-out button on Google maps. Not just the zoom-in. Because sometimes you want out. I’ve thought about it a lot since she got her car. Mark and I have talked about getting something. But what would I need it for? What would I want to get to? What did I want out for?

Now, Easter weekend I made a trip to Texas. But not the usual trip out east to see the Crouch family. This time it was to Austin and the beautiful Texas hill country. As I stepped off the airplane and into the jetway, the humid South Texas air wrapped around me like a hug. A warm and sticky hug. Not sure if you’ve ever flown through Austin, but the airport alone is a unique experience. I mean, live bands throughout. Not buskers. Legitimate, hired musicians welcoming visitors to the charms of Texas. Images of stars everywhere; actual stars…not celebrities. BBQ joints. Bluebonnets. Just Texas.

After passing out through security, I followed signs to car rentals. Stepping through the sliding doors, the Texas air hit me again, this time laced with spring. The sweet smell of blossoms was almost overwhelming. Green. Fresh. Unused. You don’t know mud is dirty until you step on fresh grass. You think you’ve eaten an apple until you pull one off a tree on a farm in the Hudson River Valley. Unused air. As if breathed for the first time, and not shared with 12 million others. Not shared with the AC systems of thousands of buildings. Or the exhaust systems of a million cars. Just fresh. Straight from the hand of God to my lungs. That’s it, I think. That’s what I’d want out for.

That night in Austin there was a birthday dinner. And laughing. And stories told, old and new. It was my friend Sally’s birthday. You see, my trip was to serve two purposes. One was to see and celebrate the birth of one of the most important people in my life and visit her beautiful family. The other was to follow my Nanny and Papa to Luckenbach, TX, about an hour and a half drive out of Austin. 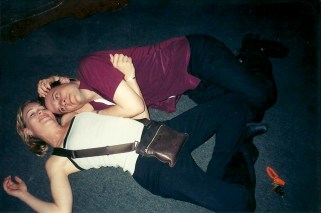 On the stage of Caravan of Dreams 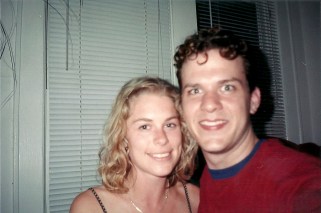 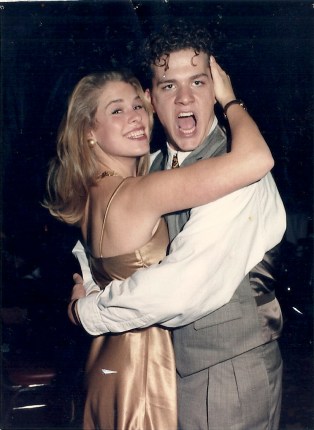 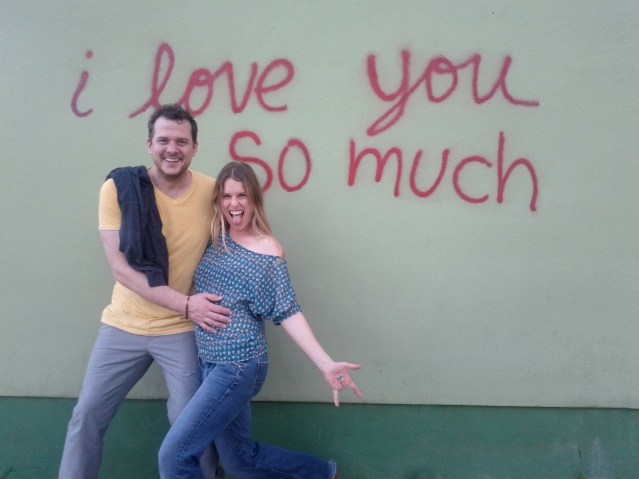 Not sure why that is. Maybe because I’ve loved her for so long and, like me, she has a wandering spirit. But finally, she is home. After trying everything from Dallas and Los Angeles and even New York City, Austin became the place for her. I’ve always loved that city, but Sally has made it a family place for me as well.

So the morning after her birthday dinner, she and I hit the road to Luckenbach, an old German settlement smack dab in the middle of hill country. Nothing left of it now but a real old-fashioned general store connected to a bar. There’s also a dance hall used for concerts and events. In front of the general store, itself a functioning post office from 1886 until 43 years ago, there is a statue of “Hondo”, the man who bought the 9+ acres of Luckenbach in 1970 in answer to an add advertising “Town – population 3 – for sale”. That’s the pic I was looking for. That picture of Papa standing next to the statue. I’m not sure if he knew or not, but this “Hondo” credited with saving Luckenbach was a Crouch. I’m not saying he’s family, but there aren’t that many of us…so who knows. 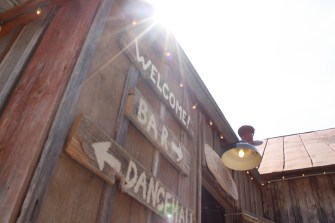 Hmmm. Which to choose. 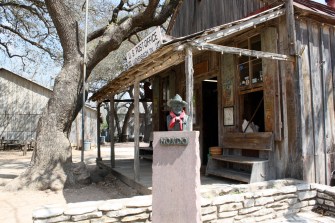 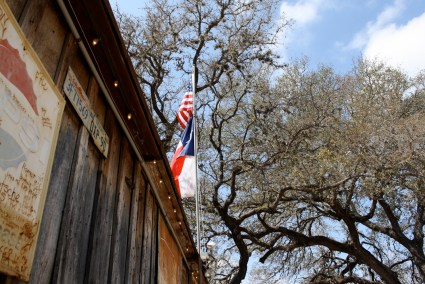 Lone Star and the Stars and Stripes

I think he’s seeing the future with those. 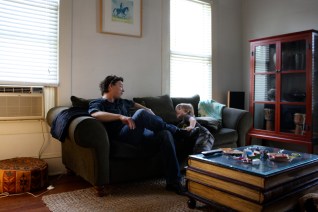 Bukka and Kru at home 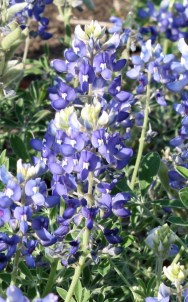 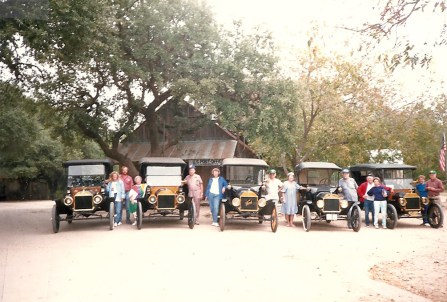 Model T Gang at Luckenbach, circa 1990

My Nanny and Papa were there on one of their many Model-T road trips. That’s right. Model-T. That’s them second car from the left. They were big collectors of antique cars and one of their favorite activities was to caravan with a string of other Model-Ts on road trips. Sometimes out west toward New Mexico. Sometimes into the deep south of Mississippi or Alabama. And sometimes straight south through Texas and right through Luckenbach. They loved those trips. Fumbling along at about 30mph. Spending as much time on the side of the road repairing flat tires as they did actually driving. No AC. No windshield wipers. No radio. Certainly no USB port for an iPad. Now that may not sound like so much fun. But when examined through the lense of relationship, they were in heaven. Because they were with friends. And that was really it. So maybe my time there was not so different than theirs. I’m sure it was a brief stop. It appears to be early Spring. I’m sure they wandered the grounds for a moment and visited the general store. Posed for a few pics and went on their way. But what makes their visit most like mine is the friends. They with theirs and me with Sally. 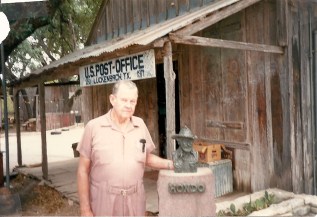 Well, I got my shot. I stood where he stood and put my hand on “Hondo” Crouch. I got a nice dose of Sally, though there’s never enough of that. And then I came home to NY with a chest full of unused air.